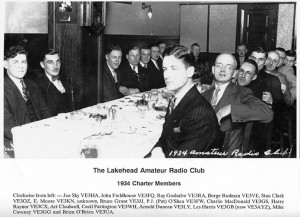 Minutes of Re-organization meeting in the Y. M. C. A.,

On Tuesday, April 17th, a meeting of the Radio amateurs of the

District was called by J. Sky, Brien O’Brien and Dr. Quakenbush to

meeting in order to organize as a body.

At the conclusion of the dinner, P. J. O’Shea was made Chairman

and called the meeting to order.

their views on the formation of an organized club, and everyone was

unanimously of the opinion that one should be formed at once.

It was moved by Brien O’Brien and seconded by C. C. MacDonald

was carried, with the following being appointed to serve on the

The following were elected as officers for the club: President P.

It was decided that the executive should consist of those forming

the committee to find a name for the club and the officers.

It was moved by Mr. MacDonald and seconded by J. Fieldhouse that

only those holding amateur experimental certificates be eligible for

membership in the Club. This was carried.

Moved by Mr. MacDonald and seconded by Brien O’Brien that a

paid for by each one attending. This was also carried.

Everyone was in favour of a suggestion made by Dr. Quakenbush

telegrams of greeting, one from the Manitoba Wireless Experimental

Association of Winnipeg and the other from the Riverdale Radio Club

Another event was the holding of a grab bag, which caused lots of

Several talks were given by various ones present.

The meeting then adjourned although there was considerable

The following were present: