In the mid- 1960’s, two-meter work in this area consisted mainly of a few isolated Hams in Port Arthur and Fort William communicating irregularly with home-brew equipment, using Amplitude Modulation (A.M.). Frequency Modulation (F.M.) was in use commercially, but gear was not readily available for Amateur Radio use, at Ham prices. In the late 60’s, commercial services were turning their tube-type radios in for solid-state, or at least hybrid equipment. 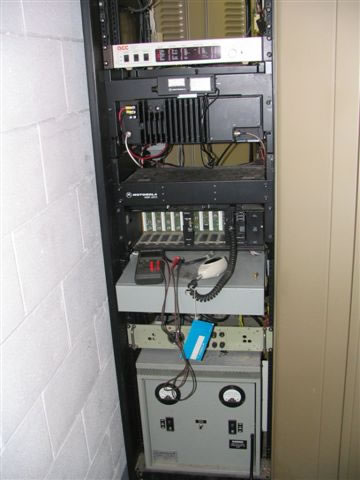 And of course, the local Ham population jumped at the chance to acquire some used FM gear, tubes and all. After the necessary conversions to get them to tune down to 144-Mhz from 160-mhz, two meters started to come alive using 146.94 simplex. Early participants were VE3EDZ, VE3EEW (now VE3AJ), VE3BCD, VE3EFI (now VE3WD), VE3AJ (silent key), VE3ECV (now VA3BEL), VE3ARN, among others.

In the early 1970’s Don McKay, VE3GST arrived in the Lakehead to take over the service facilities of Canadian Marconi on Wolseley Street, and true to his nature, Don took up the challenge of assembling a two-meter Amateur repeater. Working with Villy Madsen, VE3GHO, they managed to get a basic machine going, made up of a Marconi DT-56 Transmitter and a General Electric Mastr-Pro Receiver. The control circuit was home brewed on direct-wired plug-in PC boards in a small cage. Don had also applied for a call sign, utilizing the local airport designator of YQT, and the local RI’s were reluctant to allow this call to be used, but they relented, hence VE3YQT.

In1974, Don left town, and Villy also shortly after, so they turned the repeater project and station licence over to Laurie, VE3BCD, who got together with VE3EDZ and VE3EEW to complete and trouble-shoot the beast. There were numerous problems with voltage regulators destroying themselves, control circuit re-design, ID’er redesign, and power supply/charger construction. All of these expenses were covered by a loose association of locals who made cash donations to the cause. This was the Thunder Bay FM Association, whose sole purpose in being was to over-see the construction of a repeater.

The next item on the agenda, now that a working repeater was here, was a site.

Phil, VE3AXL, took it on himself to approach the Chief Engineer at CKPR-TV, Gerhard Buetow, for the group to install the repeater and antennae on their tower on Mount Baldy. In order for us to get there, we needed letters of backing from organizations in this area, so the Emergency Measures Organization, under Paul Werk, provided a nice piece of correspondence outlining our work with EMO,       Lakehead Search and Rescue Unit did the same, and with a few others, the go-ahead was given for the installation. But Gerhard wanted to know what antenna we were going to use. The antenna chosen, under a suggestion from VE3GST, was a pair of J-pole type of radiators, using half-inch copper pipe, mounted on a two-inch mast, with the dipoles phased. Two antennas would be needed, as there was no duplexer available. The antenna was also at DC ground for lightning protection. The dipoles were filled with expandable foam to reduce vibration, and after assembly and testing, were dragged up to Hill Street for Gerhard’s approval. No problem. Next, the feedline. Once again Phil did his thing, and acquired a few lengths of seven-eighths Heliax and connectors from tower company Leblanc and Royal, who maintained a small facility here at that time. Because we were given carte-blanche to install the antennas where we wanted, as there were no other users on the tower, we opted for 125-feet for the transmitter, and 225-feet for the receiver.

The target date to install the antennas was the Labour-day weekend in 1974.

Day one started on schedule, with Pat Doherty, VE3HFS (now VE3PD) volunteering his half-ton truck to haul the gear up Mount Baldy’s rough road.       A work party was assembled early on Saturday morning and consisted of VE3RA, VE3EDZ, VE3EEI, VE3GOE (silent key) and VE3EFC (now VE3XT), along with a member of CKPR-TV’s engineering department. Ray, VE3EDZ, headed for the basement to prepare the electricals.

The riggers were Bill, VE3EEW and Phil, VE3AXL, who made their way to the 250-foot level with a block and 500-feet of three-quarter inch hemp rope for the haul. A gin pole was dragged up, but the work was curtailed as a rain-storm was rapidly heading into the area.

So ended day one.

Day two: starting Sunday morning, the antennae were installed into their respective positions. Followed by rain, hail and high winds.

Day three: starting Monday morning, the installation of the Heliax was completed, using lots of splicing and electrical tape, as there were numerous connectors on the cable.

Work continued for almost another year on the repeater in VE3EDZ’s basement shack, with regulator problems, ID rebuilds, acquisition of a suitable cabinet,       and a host of other difficulties delaying       the actual installation until June 4, 1975, when the machine was put into its final resting place and turned on at 2345 EDT. Bert Tamblin, VE3ANP (silent key)       had the first QSO with Ray Greer, VE3CH, who was at his camp at Loon Lake. An interesting problem soon showed up shortly after the installation. The ID’er would start up and run continuously at random times, soon to be known as the “Lone Ranger Theme song” because that was what it almost sounded like. The problem was determined to be RFI from the high-power TV transmitters. A scrounged piece of fine copper screen found in the basement at the site, was attached to the control cage, and this soon cleared up this problem. It stayed this way for the next 8-years.

Range tests soon indicated a very satisfactory coverage of over 40-miles reliably, and soon W8’s from the U.P. were calling in.

And so ended phase one of VE3YQT.